Hazawa Tsugumi
Afterglow is an all-girl band in the BanG Dream! franchise. The group consists of five members, namely Mitake Ran on guitar and vocals, Aoba Moca on guitar, Uehara Himari on bass, Udagawa Tomoe on drums, and Hazawa Tsugumi on keyboard. They debuted with the song That Is How I Roll!

A girl band made up of 5 childhood friends. When Ran (Vo.) moved to a different class in middle school, the girls made a band so they could still see each other. Now in high school, they love playing in their band, practicing after school and playing live shows. They get along famously and almost never fight. Though they're still fairly inexperienced, they gained popularity for their powerful performances and strong vocals. 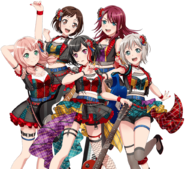 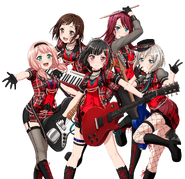 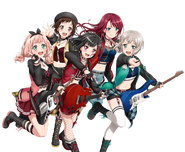 Originally each girl wore different outfits from each other with minor details matching, such as jewelry. Each member also wore matching shoes or boots in their theme color, accent by black strings, sole, and a pair of socks or stockings.

In their first anniversary outfits, the girls wear outfits similar to their original but paired with a black hoodie that has Afterglow written on it. Each girl also happens to wear buckled straps on their legs, chokers, and black boots paired with tights or socks matching her theme color.

In their second anniversary outfits, each girl wears a jacket matching her image color. While Ran, Himari, and Tsugumi share the same top with laces, Moca wears a similar outfit but with iron chains, and Tomoe wears a similar top but with belts on the bottom. While Ran, Moca, and Tomoe don’t wear any head accessories, Himari wears a hairband with a ribbon, and Tsugumi wears a black beret.