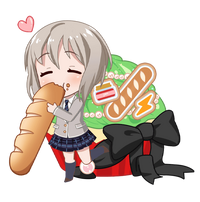 Cat Thomas (Season 2)
Aoba Moca is a second-year student at Haneoka Girls' High School and the lead guitarist of Afterglow. She has a sleepy demeanor and speaks with a slow, monotone voice, but is surprisingly sly at times.

Although everyone in Afterglow are childhood friends, she is particularly close to Ran. Outside of the band, she's friends with Saaya. She is also friends with Lisa, whom she works part-time with at the same convenience store.

Moca has short, croppy ivory blonde hair which is slightly longer at the front than at the back. Her messy bangs are separated into sections. She has big, sleepy-looking, blue-grey eyes.

Her casual attire is tomboyish and simple, normally composed of an oversized hoodie and short-shorts with a top and shoes.

Moca doesn't really have anything that she's super into, but she's the type who will get really worked up about the people she loves. The only interest she has continued to like over a long period of time is instruments and food (all kinds of bread outside of spicy ones specifically). She is quite passionate about baked goods, and has the talent of recognizing which bakery the specific bun or pastry is from just from its taste, even when she's blindfolded[2].

Moca is playful and often teases others to the point of having to be told by others to stop. Being fairly confident and sure of herself, she often showcases and comments on her own charms, passing off things like having breadcrumbs on her face as "part of her cuteness". Though while relaxed in most cases, her worries make her transparent. She also has a tendency to say non-sequiturs.

Despite her playful front, Moca is actually afraid of changes and conflict, especially ones related to the other Afterglow members, and has called herself a coward multiple times due to this. This is side of hers is especially shown in Afterglow's Second Band Story and the event Separate Paths Under One Sky where she is afraid of not being able to keep up with Ran anymore after the latter started participating more in flower arranging.

She loves Yamabuki Bakery to the extent of even labeling herself as "Yamabuki Bakery's #1 fan" in one of her area conversations with Tomoe[3], as well telling herself to buy all the bread so she can fill up her point card.

A list of characters Moca interacts with in the game (during Lives and in the dialogues at the end of every game).