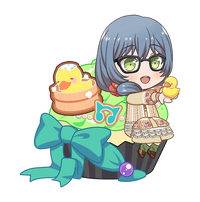 Eating ramen in public (she eats slowly, so others get impatient and cause her to be anxious)

Brittney Karbowski (Season 2)
Asahi Rokka is a first-year high school student at Haneoka Girls' High School. She goes by the stage name LOCK (ロック) and is the guitarist for RAISE A SUILEN.

She is from Gifu Prefecture. She is in the same class as Asuka and Ako, and studies at Haneoka instead of Hanasakigawa due to a scholarship program.

Rokka works part-time at Live House Galaxy, where she was appointed as the acting representative for events. She also works and lives at Asahi Bathhouse, which is owned by her relatives.

Ever since she was at elementary school, she failed at everything, including studies, no matter how hard she tried.[3] Playing the guitar was the only thing she had truly worked hard at. And because of that, she had formed a band with fellow schoolmates TRICK, BERRY, and PAT (all were monikers).

Rokka went to see SPACE's last live, in time for Poppin'Party's performance of Mae e Susume!, which prompted her to dream of creating her own band in Tokyo, and turned her into a die-hard Poppin'Party fan.

Her father was at first against her decision to study at Tokyo but she persuaded him by finding a place to live at Tokyo and finding a school that offers a scholarship for a cheaper tuition fee than that of her local high school. She promised him that she'll study hard. After that, her father told her if that is all that she can do, she should just give up and talk again later when she can do household chores. Her mother offered to teach her. However, her father allowed her to do whatever she wanted after he saw how hardworking Rokka is. She later passed Haneoka High School's entrance exam and could finally do household chores.

Her middle school band disbanded when Rokka went to study at Tokyo after performing their final song together to celebrate Rokka's "fresh start."[4]

Rokka also has a cousin named Nanami. She offered to let Rokka stay in her room (which is located near the bathhouse's boiler room) when the latter decided to study in Tokyo.

Rokka is a slender girl with leafy green eyes and slate blue hair with fringe that frames her face. The rest of her hair is held in a low and loose ponytail by a thick scrunchie with star ornaments.

When she performs, she takes both her glasses and scrunchie off. She also used to style her hair into two ponytails, and switched to a side plait with a starry scrunchie when she departed Gifu after her graduation.

Rokka is a kind and hardworking girl. Despite speaking with a stutter and having a shy personality, she has a strong core and doesn't give up easily. This is especially shown in how she refused to back down on her dream of studying in Tokyo and how hard she worked in order to buy her guitar.[5] She is very passionate when it comes to playing the guitar, and can easily talk on for hours about the subject.

Rokka has a tendency to say "hiiii" (translated as 'eek' in the English version) when she is distressed, similarly to Kanon's "fueee". She also sometimes reverts back to speaking in the Gifu dialect when she gets nervous, excited, or during tense moments; though she often uses the word "dera" ("really" in Gifu dialect) even outside of these moments.

After she and Mashiro befriend each other in Little Rose Harmony, the two tend to argue over who likes Poppin'Party more.

A list of characters Rokka interacts with in the game (during Lives and in the dialogues at the end of every game).