This is a comprehensive list of all the other supporting characters in the BanG Dream! franchise (both anime and game).

Kasumi and Asuka's mother who is a housewife. She is also married, but her husband has never been shown on-screen.

Saaya's father and owner of the Yamabuki Bakery. In BanG Dream! 1st Season, he cooperated in making bread for the school festival cafe.

Saaya's mother. She is frail and often suffers from anemia. On her good days, she does household chores with Saaya. 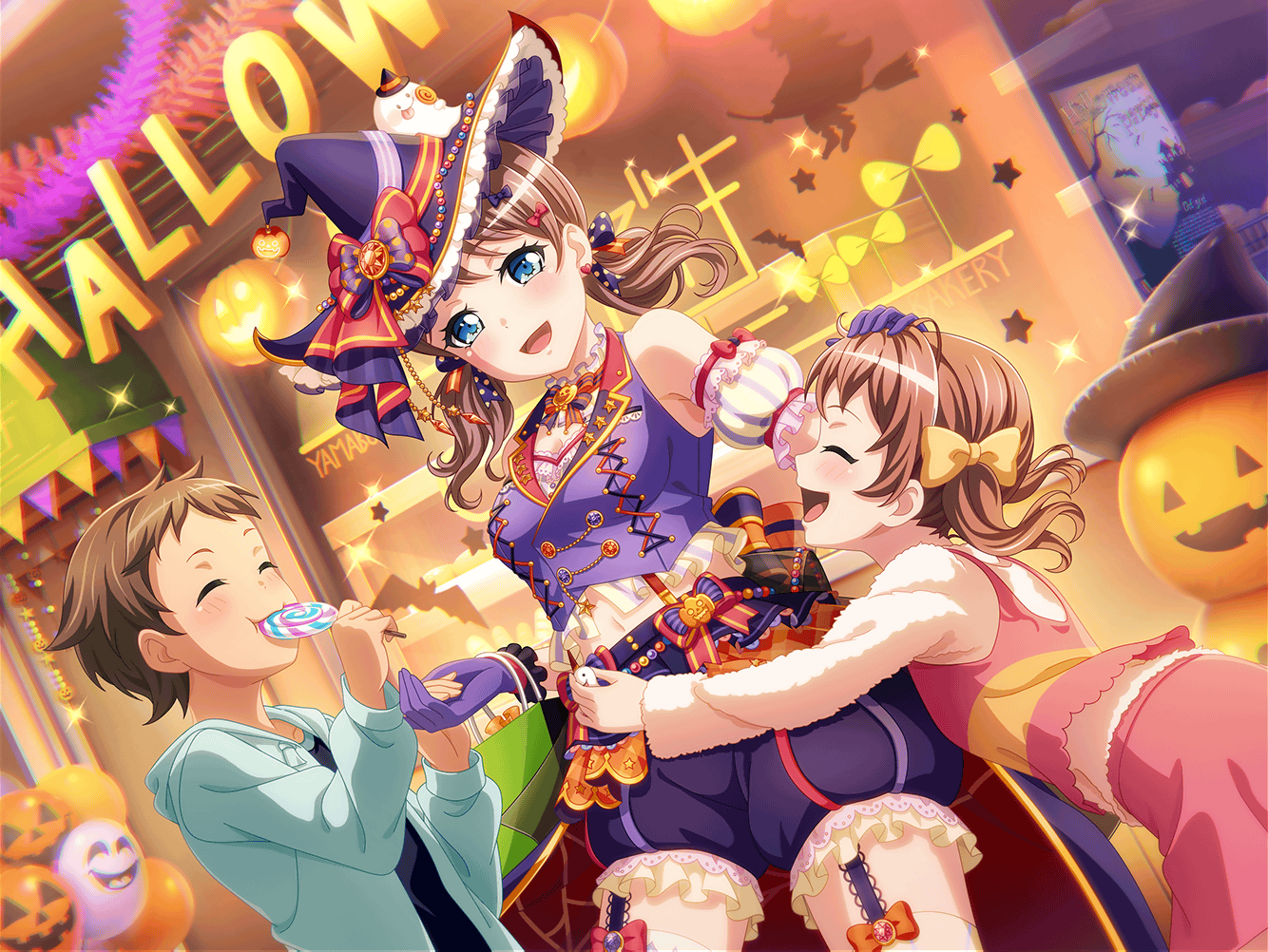 Saaya's younger sister. She often plays with Saaya and Jun and gets along well with Kasumi, who calls her "Sanan".

Arisa's grandmother and owner of the Ryuuseido. She manages the pawn store together with her husband. She has a generous personality and was shown serving Kasumi dinner when they first met.

Tae's mother who has a very similar personality with her daughter. In the 13th episode of BanG Dream! 1st Season, she watched SPACE's final live with her husband.

Chiyu's mother. She is a world-class violinist who works and lives in the US. Ever since Chiyu was young, she had high expectations of her and forced her to learn different instruments such as the piano and the violin, as well as participate in different music competitions. She often sends different kinds of clothes to Chiyu.

An employee at the live house "SPACE".

Live House Galaxy's manager. She managed Galaxy alone until Asahi Rokka started working as a part-timer. She trusts Rokka and even made her the acting representative for events.

Masuki's father. Masuki calls him "Oyaji" (親父). He used to play the drums in the death metal band "Death Galaxy". He also owns the "Galaxy Fruit and Vegetable Store" (銀河青果店). Although he looks quiet and strict, he shed tears when he saw Poppin'Party's performance.

A college student and Rokka's cousin, she is the daughter of Rokka's relatives who own Asahi Bathhouse. She took Rokka around the city to cheer her up. While Rokka was still hesistant whether she should go watch SPACE's final live, Nanami encouraged her to do so while deciding for herself not to give up on her dreams. In BanG Dream! 2nd Season, Rokka mentions she went to study overseas. She owns the room where Rokka lives in.

Rokka's father who lives in Gifu. He was initially against Rokka's decision to study in Tokyo. Eventually, he accepted her decision when Rokka was able to get a scholarship and do household chores on her own. According to her grandfather, Rokka's stubbornness and strong-willed personality might have come from her father.

Rokka's mother who lives in Gifu. She supported Rokka's decision to study in Tokyo and taught Rokka on how to do household chores.

Rokka's grandfather who lives in Gifu. He adores his granddaughter and accompanied her when she bought her guitar. He also supported Rokka's decision to study in Tokyo.

Rokka's grandmother who lives in Gifu. She taught Rokka how to cook and do other household chores when the latter wanted to move to Tokyo.

Her band nickname is "PAT", from her last name's character "鳩", which is etymologically read as "pato".[1] She played the drums and was also the one who invited Rokka to join the band.

When Rokka decided to move to Tokyo, she said that she would support Rokka wherever she went. On their last get-together, she suggested that Rokka play the Poppin'Party song she had watched during SPACE's last live. On the day of Rokka's departure, she sent her off wishing for a good band in Tokyo.

Her band nickname is "TRICK" (トリコ), which came from her name Toriyama Koharu. She played bass and was in charge of making small items. She has long hair tied at the back.

She supported Rokka's decision to move to Tokyo and sent her off on the day of Rokka's departure.

Her band nickname is "BERRY", in reference to her name "Ichigo", which means "strawberry". She was the vocalist and guitarist. She often talked about guitar with Rokka, who plays the same instrument.

She supported Rokka's decision to move to Tokyo and sent her off on the day of her departure.

The owner of the ramen store Masuki works at. She played the guitar and was also the vocalist for the death metal band "Death Galaxy". She calls Masuki "Ojou".

A new staff member working at CiRCLE. This is the in-game player character, whose name is changeable.

In order to gather participants of the live event planned by CiRCLE's owner, the "new staff" will scout the girl bands according to Marina's instructions.

After the opening story, the new staff has almost no direct involvement in the game, except in the special episodes of each member's card stories, where they appear alone or together with Marina to talk with the member. This is because the relationship between the characters is drawn in a realistic manner, and the existence of the player character is not considered as important.[2]

He was the vocalist for a popular band back in his youth. He is the primary inspiration for Yukina's singing career, and Yukina says he is the musician she respects the most. Yukina became a vocalist in order to convince him to start playing music again. Eventually, Yukina made the decision to stop singing for his sake and to do it for herself. He provided the composition and lyrics for an unreleased song, which featured in the event A Song Unfinished.

He is the head of a family-run flower arrangement school that has a hundred-year-old history. He expects his daughter Ran to inherit the school, and initially sees her band career as an impediment to their legacy. They often butt heads for this reason; at first he believed that his daughter was just going through a rebellious phase. However, after Ran was able to convince him of her dedication to Afterglow, he became a supportive parent much to Ran's embarrassment, and even started attending their concerts and buying their CDs.

Akari is an elementary schooler and Hagumi's friend. She is a kind and hardworking girl. She is a member of the shopping district's softball team, which is captained by Hagumi. After her legs were injured in a car accident, she was hospitalized and became depressed. Hello, Happy World! made it their mission to make her smile again, convincing her to try physical therapy and get better. After recovering, she dreams of working in a hospital.

Three bodyguards who serve the Tsurumaki family and are always shown wearing black suits and sunglasses. They are extremely loyal to Kokoro, are shown to be capable of almost anything, and grant all of Kokoro's whims and wishes. They follow Kokoro everywhere, except to school. They take care of Michelle's suit. They also take care of the other Hello, Happy World! members when they are in trouble. Kokoro and the rest call them "People in Black."

One of the members of the former idol unit "Marmalade". Aya admires her and she had a great influence on Aya's idol image. After Marmalade's graduation concert, Aya gets a chance to talk to her, and then vows to become an even greater idol than she was.

Eve's good friend from Finland. She learned Japanese together with Eve before the latter moved to Japan. According to Eve, she resembles Chisato. She is friendly and quite perceptive, as she was able to see through Eve's lies even through their conversations on the phone.

A bunny mascot that Michelle faced against in the Fluffy Mascot Competition. It is soon revealed that the person wearing Marie is in fact Hagumi, and how her father told Hagumi that if she competed and won, the downtown area would become more lively. After scoring the first place together, Marie became more popular and Hagumi started attending more events together with Misaki.

A mole person saved by Pastel*Palettes in the sci-fi movie they filmed. Its Japanese name is read as Mogu-chan, but was localized as Mo-chan.

Mio is the unit's leader and a hardworking girl. Serina is slightly airheaded and initially called herself the Angel Idol Seririn (エンジェル系アイドルセリリン), before changing her title to Fairy Idol Seririn (フェアリー系アイドルセリリン) after realizing "she is more like a fairy". Shino is very energetic and honest, and even did an in-depth self-introduction during VividCanvas' first live appearance.

Japanese Name:ミラ
First Appearance: This Warmth in My Heart

A pro musician who sings and plays the guitar. She has toured all across the country, appeared on TV, her songs get played on the radio frequently, and she was even directly invited to play Future World Fes. She approaches Roselia and asks them to perform together in her next show.

The princess of the Happyneru Kingdom, a small European country, who looks exactly like Kanon. She is meek and speaks very politely, and Kokoro says she reminds her of the "old Kanon" (whom she met before Hello, Happy World! had been formed). Having been born with a weak body, she could barely go outside, and as a result grew up to be very sheltered. Even after her health improving, she is afraid of going outside. According to her maids, they have never seen her smile.

A manager working at a talent agency that approaches Roselia (and specifically, Yukina).

The producer of the Saga-based idol group Franchouchou. Aya accidentally bumps into him at the airport, but both apologize and leave on good terms. Pastel*Palettes meet him again in the hotel they are staying at, after putting on the "relaxing body cream" given to them by the agency staff and having to find a place to hide in. He is mad at Pastel*Palettes for taking Franchouchou's spot in the Gabai Gabai Matsuri (がばいがばい祭り), calls them thieves, and tells them he doesn't believe such city idols could handle that gig. As they meet again multiple times, Koutarou constantly belittles and yells at them, but at the same time gives them advice in his own way, which leads to Pastel*Palettes realizing what they've been doing wrong.