BanG Dream!: Star Beat (BanG Dream! 星の鼓動, Bandori! Sutā Bīto) is the first manga for BanG Dream!. It was written and illustrated by Ishida Aya (石田彩). It was serialized in Monthly Bushiroad from January 8, 2015 (February 2015 issue) to December 8, 2015 (January 2016 issue) for a total of 12 chapters.

Toyama Kasumi, a first year high schooler with a shy personality, can no longer sing and express her emotions ever since she was made fun of her singing her favorite song. She is lonely and could not make friends even after entering high school. The only time she could show her emotions is through an exchange diary on her desk with a mysterious person named "Saaya" (サアヤ). Saaya seems to attend classes at a fixed time.

On one of her melancholy days, she saw star-shaped stickers pointing to a direction which she followed and end up at a pawnshop where she found a star-shaped guitar named "Random Star" (ランダムスター).

While learning guitar basics, Kasumi met a mysterious girl, named Ushigome Rimi, who can play the bass. With the advice of Saaya, Kasumi, Arisa, and Rimi formed a band. The three of them decided to make a song with the title "Yes! BanG_Dream!" which is the words written in a note left by Arisa's father. Kasumi had written the lyrics with the help of Saaya.

They got help in composing the song from Hanazono Tae, the girl playing a guitar on the school roof. Tae soon joined and the band completed the song. The four performed at the summer festival. Saaya, who was revealed to be Yamabuki Saaya, had written in the desk that she had watched their performance. Saaya had played the drums. The four asked Saaya to join the band but she refused, shocking Kasumi and making her lose her confidence again. Will Kasumi be able to make Saaya join the band? And what is the mystery behind the word "BanG_Dream!"?[1] 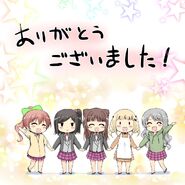