BanG Dream! is anime television adaptation animated by Issen and Xebec started airing on Tokyo MX on January 21, 2017. The anime has been licensed in North America by Sentai Filmworks is streamed on the Anime Network and by Crunchyroll. The anime ran for 13 episodes and was released across seven BD/DVD volumes.

An OVA episode was advanced screened before the release of the 7th BD/DVD volume which contains it on November 22, 2017.

A Blu-ray BOX was released on November 28, 2018. It contains all 13 episodes, OVA, and a 260-minute bonus material which includes studio lives that were either previously aired online or included in previous BDs.[1]

Just like the sparkling sound "Star Beat”" that she heard while looking up at the starry skies when she was young, Toyama Kasumi has been searching for something that would excite and make her heart pound. After getting into high school, Kasumi comes across a star-shaped guitar in an old pawnshop. It is this fateful meeting that evokes the emotions that have been locked up within Kasumi. 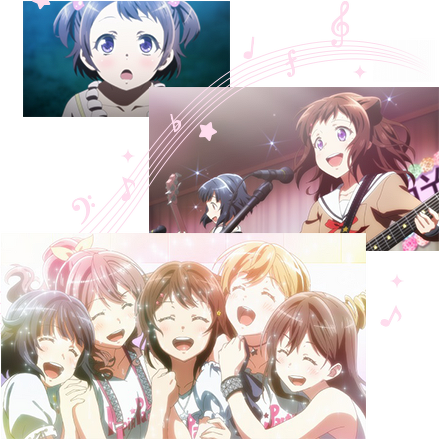 Teaming up with four other girls who, like Kasumi, dream of a place that can make them shine, the five of them work towards realising their musical dream.