BanG Dream! Episode of Roselia is a two-part film series focusing on Roselia.

Both films were animated by Sanzigen. Kakimoto Kodai, director of BanG Dream! 3rd Season, was the chief director. Mimura Atsushi, CG supervisor for the third season, was the director.

To reach the stage of "FES.", Yukina Minato decides to form a band. Each holding their own convictions, the members of the band come together. The five girls now begin their journey to the top as Roselia... This is the story of their "promise" made to each other, from the start of the band to their challenge towards FUTURE WORLD FES! (via English site[16])

After overcoming numerous tribulations, the members of Roselia promised to appear on FUTURE WORLD FES.
It is now Autumn...

Through writing the lyrics of "Promise," Lisa has matured.
Watching the change of color in the autumn leaves, Yukina and Sayo expressed their resolve in a picture letter to their future selves.
Driven by the wish to do something for Roselia, Rinko has started to compose a new song.
"The remaining quests are the contest, the tournament, and FUTURE WORLD FES..."
Reflecting on their goals, Ako starts to feel anxious.


What view will the five of them see beyond FUTURE WORLD FES? (via English site[17])

Part I: Promise
Part II: Song I am. 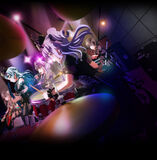