It was announced on March 16, 2020 and premiered in Japanese theaters on August 20, 2021. Additionally, a pre-screening was held in five selected theaters across the country on August 10, 2021.[2] It later premiered in the United States and Canada through Eventive on September 18, 2021.[1]

This time, 2 new bands will be joining Poppin'Party, Afterglow, Pastel*Palettes, Roselia, and Hello, Happy World! on stage! Morfonica, a symphonic band with a fantastic world view, and RAISE A SUILEN, a rock band declaring to be the best!

A collection of the mixed band songs performed during the movie's encore portion was released on August 25, 2021.

The following is the official setlist of songs for the movie:

Note: The encore song changed on a weekly basis during the movie's theatrical run. 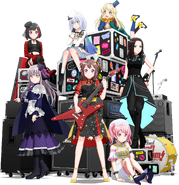