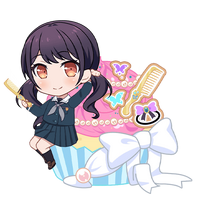 "Reach for It Girl"

mika
Futaba Tsukushi is a first-year student at Tsukinomori Girls' Academy and the leader and drummer of Morfonica.

She is classmates with Mashiro, and is also their class's class president.

Tsukushi lives with her parents and two younger sisters. Her father runs and manages different food businesses, with one of them being the café at the local shopping mall's food court.[1] Prior to the formation of the band, she had some experience with drums, as she used to play drums in the marching band when she was in elementary school.[2]

She has attended Tsukinomori all the way from kindergarten and knew about Touko as the two attended elementary and middle school together. However, they had never talked to each other, and when they first meet at CiRCLE, Touko mistakenly calls her "Tanaka-san" and "Yamada" (two very common Japanese surnames).

Tsukushi has dark purple hair and orange eyes. Her hair is put into twin tails.

A class president who's always full of confidence. Though Tsukushi tries her best, and can be quite stubborn at times, her clumsiness comes out every now and then; Touko likes teasing her about this, which sometimes leads into them arguing. She has a pure heart and also works tirelessly to become a reliable and trustworthy person. She dislikes being treated like a kid, especially due to her short stature.

A list of characters Tsukushi interacts with in the game (during Lives and in the dialogues at the end of every game).

Futaba (二葉): Futa (二) means "two" and Ba (葉) means "leaf". When combined, Futaba may refer to the twinleaf plant, which further hints at Tsukushi's normal twin-tailed hairstyle. Futaba may also mean "sprout". Incidentally, there are also only two locations in Japan with Futaba in their names: Futaba in Fukushima and Futaba in Yamanashi.