Sunshine City, Ikebukuro, Tokyo
GARUPARTY! 2019 in IKEBUKURO was one of the joint events for GARUPARTY and Revue Starlight -ReLIVE- Festival 2019 in Ikebukuro. It was organized and sponsored by Bushiroad.

Contestants had five attempts to post the highest score in each song.

Contestants with the highest combined total score progressed to the second qualifying round.

Round is split in two parts. Contestants are split in groups of five and played the same two songs.

The top contestant from each group progressed to part 2 of the round. Here, they played a different pair of songs.

After each group plays the songs, the top five contestants from each venue move onto the semi-finals in Ikebukuro.

Each group of five played one common song and one song unique to the group.

The contestant with the highest combined score in each group moved onto the final. 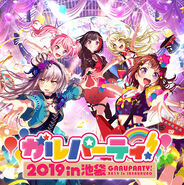