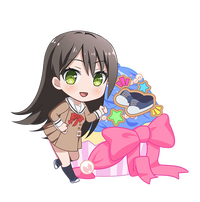 "Chasing Rabbits in the Garden"

None (Nothing too weird, though...)

Luci Christian (Season 2)
Hanazono Tae is a second-year student at Hanasakigawa Girls' High School and the lead guitarist of Poppin'Party. The other members call her O-Tae.

She is a huge lover of music and used to work part-time at SPACE before it shut down after the final live, which Poppin'Party also played in.

Tae lives with her parents and 20 rabbits. She has considerable skill with the guitar, since she started playing it when she was in elementary school.

One day, when Tae had to finish her home economics assignment with Kasumi after school, she started interacting with her and taught her how to play the basic guitar chords.

Tae at first doubted Kasumi's idea to audition at SPACE when she told her about it, because the band needed a considerable skill level to pass. But when Kasumi performed for the first time in front of their friends and family with Arisa, Rimi, and Tae herself, Tae realized how much fun she had performing with them, which led to her joining Kasumi's Poppin'Party as its fourth member. Adding to this, Tae was impressed by their own performance and believed in their potential.

Tae has gentle green eyes and straight, waist-length, dark brown hair. She has choppy bangs with a section of hair that reaches her navel and covers her right ear.

Her casual attire is mature with feminine accents like sheer fabric and gems.

During winter Tae wears a pink fluffy sweater which shows her shoulders off and blue jeans. She also has a black choker around her neck. During summer, she wears a mint green T-shirt with flowers on top, high waist loose white pants with a belt, and a thin black necklace.

A relaxed individual who lives at her own pace, Tae sometimes surprises the people around her with her keen observations and understanding of music. She carries a sense of knowing in her discussions with others, while always keeping an optimistic outlook on a situation. However, she is also slightly airheaded like her mother, and tends to make or say weird remarks befitting to the situation at hand.

Tae loves both rabbits and hamburg steaks and is constantly thinking about them, sometimes to the point of daydreaming and losing focus during a conversation. She loves rabbits so much to the point where she started doing imitations of her rabbits during the New Year party's talent show.[1] In addition to this, Tae has compared other people, such as Rimi and Arisa to rabbits (Rimi because of her overall nature, and Arisa because her twin tails remind Tae of a rabbit's ears). She affectionately refers to one of her rabbits, Odd-Eye (nicknamed Occhan in Japanese and Oddie in the localized version), as her boyfriend.

A list of characters Tae interacts with in the game (during Lives and in the dialogues at the end of every game).

Tae (たえ) means "odd". Its Kanji is actually (妙) and can be referred to her abnormal personality.