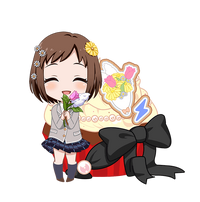 Allison Sumrall (Season 2)
Hazawa Tsugumi is a second-year student at Haneoka Girls' High School and Afterglow's keyboardist. She is often called "Tsugu" by her friends.

Eve works part-time at Tsugumi's family's cafe, and Tsugumi herself also helps out there. She is also the vice president of Haneoka's student council.

Tsugumi has soft brown eyes and chin-length chestnut brown hair in a bob. She has a small side-swept fringe. Her casual attire is feminine with natural colors.

In her initial casual wear, Tsugumi wears a cream-colored button-up cardigan which she keeps open, a brown striped dress and black tights.

During winter, she wears a patterned cardigan with dark brown sleeves, a teal knee-length skirt and black tights. During summer, she wears a white T-shirt and a light blue-grayish dress with a flower pattern. She also wears two sunflower-shaped hairpins and a small brown wristwatch.

Tsugumi views herself as the most normal girl in the band. However, she is a very hardworking and optimistic person who rarely gets discouraged, and her optimism buoys the other members' spirits. She is the one who also pushes the band to do and try different challenges, such as entering the Girls Jam concert event[1], and Tsugumi was even the one to suggest that the girls start a band[2]. She can easily get flustered however, and tends to panic or have trouble with dealing with new people.

A list of characters Tsugumi interacts with in the game (during Lives and in the dialogues at the end of every game).

Tsugumi (つぐみ), when written in Kanji (鶫), means "thrush" which is a medium-sized songbird that typically have a brown back, spotted breast, and a loud song.