Hello, Happy World!, often shortened to HaroHapi (ハロハピ) or HHW, is an all-girl band in the BanG Dream! franchise. The group consists of five members, namely Tsurumaki Kokoro on vocals, Seta Kaoru on guitar, Kitazawa Hagumi on bass, Matsubara Kanon on drums, and Okusawa Misaki on DJ. They debuted with the song Egao no Orchestra!

A band formed on the concept of "Making the world smile." The super optimist and crazy rich Kokoro (Vo.), the beautiful and ever-popular Kaoru (Gt.), sporty and cheerful Hagumi (Ba.), the kind-hearted and girly Kanon (Dr.), and calm, cool and collected Misaki (DJ) make up this band. They often perform at pre-schools and children's hospitals, making them popular with the youngsters. 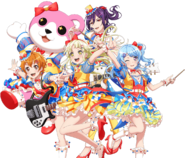 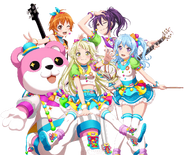 The Magic of Smiles

Inspired by Marching Bands, their first original costume consisted of a white top and skirt for three members, while Kaoru wore pants and Hagumi chose black pumpkin pants. A red vest with gold and black detail is worn over this with three chains attached at the middle. The black and gold collar accents the fringed shoulder-pads, wrist accessories, thigh-length boots, and marching hats.

Their second band uniforms have been inspired by the Circus, with a red, white, and black top with gold detail and five pom-poms sewn down the center, coming in the band members colors. Sticking out of the bottom from this is ruffled, layered light blue and white fabric with the same pom-poms in various sizes, worn with a pair of black short-shorts. While Hagumi and Kokoro have black shoulder straps and ruffled sleeves beneath the shoulder, Kanon wears a white blouse with her dress. They also have a polka-dot bow on their neck and blue earrings. Kaoru and Michelle wear a male variant of this outfit, including a jacket and pants. Each member wears the same black, white, and red shoes with curved heel and pom-poms sewn to the toe in her own color, along with a black and gold top hat with Hello Happy World! and a smiley face drawn on it, and a red ribbon wrapped around the middle.