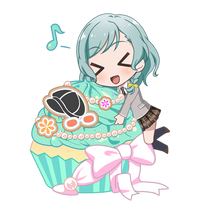 Katelyn Barr (Season 2)
Hikawa Hina is a third-year student and the student council president at Haneoka Girls' High School, as well as the guitarist of Pastel*Palettes. She is the younger, more bright-eyed twin of Sayo.

Hina started playing the guitar after seeing Sayo do it, and then became a member of Pastel*Palettes after she passed an audition. At first Hina claimed to be in the band only to kill time, but after spending time with the other members (and thanks to Aya's efforts) she got more invested in it.

Like her sister Sayo, Hina has sharp green eyes and light, wavy teal hair. However, her bangs are brushed towards the right, and her hair is shoulder-length. Sections of her hair are worn on either side in a braid held by tiny yellow bows.

Her casual attire is fairly tomboyish, featuring pants or shorts and a gingham jacket worn on, or around her waist. During performances, however, she wears frilly and feminine outfits, keeping in theme with the other band members.

A natural genius with an impeccable memory, Hina can acquire and master new skills very quickly, often even with just one attempt; as a result, she tends to get bored of things quickly and is always looking out for new and interesting (or as she says, boppin'♪) things to do, as well as be intrigued by things she doesn't understand. She is very cheerful and carefree, but her relaxed mindset also makes her unable to understand other people's emotions, and as such doesn't sometimes notice if she's insulting them. With this, Hina is also very candid, always being honest and sure of both herself and her actions, though at times she ends up being more blunt than honest. She also likes teasing her friends, especially Aya, and can be a troublemaker sometimes.

Unlike Sayo, who dislikes being a twin, Hina seems to embrace it. She is very supportive of her sister and loves her regardless of how she treats her, but they often get into arguments due to their conflicting personalities. To add to this Hina wants to do most things together with her, but this ultimately has led to Sayo quitting most of her hobbies as she felt like Hina was just copying her and then always did it better than her, thus feeding into her inferiority complex more. However, as the story goes on, the two start getting along again and both Hina and Sayo start understanding each other more, and Sayo getting embarrassed each time Hina expresses just how much she loves her.

A list of characters Hina interacts with in the game (during Lives and in the dialogues at the end of every game).

Retrieved from "https://bandori.fandom.com/wiki/Hikawa_Hina?oldid=113792"
Community content is available under CC-BY-SA unless otherwise noted.