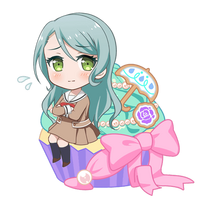 Elissa Cuellar (Season 2)
Hikawa Sayo is a third-year student at Hanasakigawa Girls' High School and the guitarist of Roselia. She is a member of both the student council and disciplinary committee.

She is the older and more serious twin of Hina.

Sayo is the older of the twins, but she used to see this as more of a burden than anything. Ever since they were younger, Hina has always bested Sayo in everything, in simple things such as seeing who can swing higher in the playing ground's swings to test scores. Whereas Hina can master new skills with ease, Sayo requires a great deal of information before she can even begin to practice. As a result, Sayo formed a severe inferiority complex towards Hina. One of Sayo's main reasons for starting to play the guitar was because "it was something Hina wasn't doing".

Sayo's intense dislike for carrots also comes from her childhood: Hina was actually the one who used to dislike them, and Sayo would always eat Hina's carrots for her, which then resulted in Sayo getting scolded over not eating hers. Despite her dislike, Sayo has said she can't remember what exactly caused her to avoid them.[1]

Although Sayo and Hina were originally very close, doing everything together, Sayo's feeling of inadequacy caused her to drift away from her twin, until eventually she began trying to shut her out of her life entirely. However, as the story goes on, she also tries her best to fix their relationship and start understanding Hina more, and is shown to act more kindly towards her, as well as to the other people around her.

Sayo has slanted green eyes and long, light, teal hair about navel length with her forelocks worn behind the ear with a curl on the end. Her bangs are neatly parted with the exception of a single loose lock.

Her casual attire is simple with a tomboyish, yet cute tone, mixing pale and dark shades.

A serious and fussy girl, Sayo is somewhat cold in nature, even towards those she is close to. She never cuts corners or accepts shoddy workmanship, and is far too serious for her own good. She tends to stubbornly deny liking or being fond of certain things, such as fluffy animals or french fries.

In comparison to her sister Hina, Sayo is fairly stiff and sharp, and is highly stubborn when trying to do what she believes is best for others. She is very formal, and addresses most people by their last names, except for her sister and Tomoe. Like Yukina, she is prone to make snide or frank remarks, though often these remarks do not reflect how she actually feels.

A list of characters Sayo interacts with in the game (during Lives and in the dialogues at the end of every game).