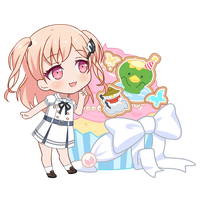 "Did I Say Something Weird?"

Collecting toys and prizes that come with products

She is also classmates with Touko.

Nanami lives together with her parents in a big house with an atelier, where the band practices. Her mother is a painter, while her father is a sculptor. Her parents are known for their artistic talents, but also for being quirky and odd, and as a result, Nanami doesn't want others to interact with them.[2]

It is due to their odd nature that Nanami yearns to be a normal girl, as she believes that being normal is the only way to get friends. However, because she inherited their intellect, talents, and artistic skills, people have had high expectations of her. As a result, others were jealous of her and she had no friends at all, especially in middle school, when she won an art contest which resulted in her deciding to hide her talented and genius nature.[3] She joined Morfonica because of the popularity of the girls' band trend.

Nanami is also a member of Tsukinomori Girls' Academy's Horror Research Club, where they watch horror movies amongst other things.

Nanami has slightly past shoulder-length light pink hair and pink eyes. Part of her hair is put into twin tails.

A somewhat peculiar girl who longs to be normal, and constantly wonders whether the things she does or says are normal. She worries about standing out and hides her true self in order to blend in. Due to the fact that she hasn't had many friends, Nanami has no idea how to stop people when they argue and such, was even willing to search the internet for a guide for that.[4]

Though she hides it, she gets excellent grades, has great artistic skills and is a bit of a genius, and tends to brush her achievements off with phrases like "it was just a coincidence" or "this is nothing special". Adding to her genius nature, she is able to do things just with a bit of research on the internet, such as arranging songs or making the accessories for the band's outfits.

A list of characters Nanami interacts with in the game (during Lives and in the dialogues at the end of every game).