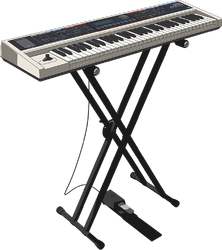 Arisa's grandparents run a pawnshop called Ryuuseidou, and she lives in a big and traditional house, which includes a basement where Poppin'Party practices and hangs out at most of the time. Ryuuseidou is also the place where Kasumi found her guitar, Random Star, from.

When she was younger, Arisa picked up to learn the piano but then quit it halfway through because she didn't have any motivation to continue, and because she had to study for middle school exams[2] - when she befriended Kasumi and heard about her plans to start a band, she picked it up again so she could be Poppin' Party's keyboardist.

Arisa has long, slightly curled blonde hair worn in two pigtails held with ribbon or bands. Her bangs are mostly spread, with the exception of a few curled strands that stick up. Her forelocks are held with cross-shaped clips. She has gentle light brown eyes.

Her casual attire is mature and feminine, usually with lace or flowery details and long skirts. Arisa wears a black blouse with sheer off the shoulder sleeves tucked into a white skirt with lilac floral patterns.

Arisa is an introvert whose hobbies include tending for bonsai plants and internet surfing. Even though she's basically a shut-in and admits to being lazy by nature, she still manages to achieve excellent results in school due to her intellect.

She tends to be quite moody, and because of her sharp tongue and being hot headed, often gets into arguments with others (especially Kasumi). Usually, however, this is because she is unable to be honest with herself. She easily blushes and starts stammering when she gets complimented, especially by her fellow Poppin'Party members. She blushed very hard when Rei complimented her that she was the most talented in the music school Arisa attended when she was younger, and got so flustered she ran down the hallway. Though she denies it, she gets lonely easily.

It was shown that in the past that Arisa was a loner who always did things by herself, and claimed not to need help from other people. However, after meeting Kasumi, she slowly started changing, showing her more of her kind side and interacting with other people as well. Due to her grounded personality, the other members of the band often tease her on friendly terms, though it doesn't stop her from getting frustrated.

In the beginning, and as a way of trying to maintain her image of a refined, rich girl, she talked in a very polite and exaggerated manner with people she hadn't interacted with before, or did not know well (such as Eve and Misaki in the game's first event story).

A list of characters Arisa interacts with in the game (during Lives and in the dialogues at the end of every game).

Ichigaya (市ヶ谷) refers to the eastern portion of Shinjuku. It can also be split into three parts: Ichi (市) which means "market", Ga (ヶ) which is alternative spelling of an obsolete possessive marker が (ga), and Ya which means "valley".