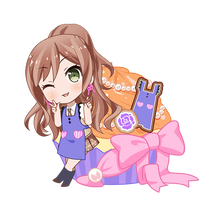 She follows gyaru fashion, but keeps her interest in amigurumi secret, since it does not match her image. She is a proficient bassist, wowing the other Roselia members in her audition, and is a great cook as well as a baker.[2]

She is best friends and next-door neighbors with Yukina, and has known her ever since they were little. Outside of the band, she is also friends with Moca, who is her coworker at her part-time job at the convenience store.

Lisa has fair skin with curvy green eyes and long, wavy, soft dark ginger hair with thin curled forelocks and long, thin bangs. She wears a part of hair up in a ponytail. She also wears a pair of pink earrings shaped like upside-down bunnies in both her spring and summer outfits.

Her casual attire consists of neutral tones mixing with black to create a grown-up look. In her initial outfit, Lisa wears a knitted off-the-shoulder dress, a black belt around her waist, and knee-high boots. Her outfit is completed by a black upside-down bunny necklace.

During winter she wears a loose, off-the-shoulder maroon shirt with a black top underneath, a white miniskirt and thigh-high black leather boots. She also has decorative chains around her waist and wears hoop earrings. During summer, Lisa wears a pink T-shirt which has the design of red heart with a tongue, completed with roses below and feathers and with the text "Love" above it. She also wears two bracelets on her left wrist, a brown wristwatch on her right wrist, a golden necklace and ripped short denim shorts.

She is also always seen with lip gloss, regardless of the occasion. Prior to joining Roselia, Lisa used to own artificial nails, but removed them in order to devote herself to the bass.

Lisa is a friendly and lively girl who appears mature and calm. Despite her appearance, Lisa acts as the mediator in tense situations, and takes care of everyone well. It's because of her that Roselia is able to continue to stick together despite the contrasting members personalities and disagreements at times. She often chides the others if she feels necessary, bringing balance to the group.

Lisa is very caring in nature, and is able to notice when a friend is troubled, usually being the first to try and help. She does her best to do what she can, sometimes to a fault, where she'll put her all into something regardless of her own feelings. Adding to her caring nature, she sometimes calls herself an "onee-san", but the other characters have also compared her to a mother at times.[3][4]

Despite her skills and proficiency as a bassist Lisa believes she is the least skilled member of Roselia, and can get quite sentimental at times as well. She easily cries when her friends, or especially Yukina, reaffirm just how much she is needed in the band or in general. However as time goes on, she becomes more confident and is able to call herself a proud member of Roselia.

A list of characters Lisa interacts with in the game (during Lives and in the dialogues at the end of every game).

Lisa (リサ), depending on the kanji writing, possible meanings may include "pear, coloring, reason, aid".