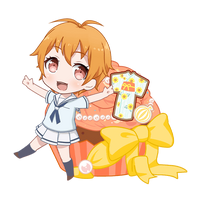 "Kitazawa Mark is the Mark of Vitality"

Outside of the band, she is also friends with Saaya, and is also classmates with Tae and Eve.

Hagumi is the only daughter of a family of butchers. They own a meat shop, where their bestselling item is their croquettes. She often helps and tends around the store during her free time.

According to Hagumi, her parents fight often and when this happens, her mother becomes prone to emotional outbursts and her father disappears for days at a time. She also states that her parents don't approve of her energetic personality, as they believe it is not proper for a girl to behave in such a way. As such, Hagumi uses sports as an outlet.[1] She also says that her father is really scary when he gets mad.[2]

Hagumi also has an older brother who taught her to play the guitar a bit in the past, which made learning to play the bass easier for her.

Hagumi has copper eyes and short, bright orange hair. Her bangs and forelocks frame her face, and she has two long cowlick split at the center.

Her casual attire combines sporty and feminine items, such as a white sundress with sunflowers across the top and bottom, a bright orange jacket, and a brown backpack.

During winter, she wears a long and brown knitted sweater, which dark-brown bear-shaped pockets on it and dark shorts underneath. During summer, Hagumi dons a white-and-blue short-sleeved college jacket, a red pleated skirt, and a dark blue beanie with animal ears on it.

Lively and passionate for sports, Hagumi is known for her sunny disposition and energetic nature. She is cheerful and can be a bit of a show-off, but she usually doesn't take things too far. She tries to convince others to indulge in her sporty hobbies at times.

Despite her tomboyish personality, Hagumi has an affinity for cute things and has a complex over her boyish appearance. She especially loves Michelle's costume due to how it resembles a large stuffed bear. She can also be surprisingly sensitive and cautious of others' emotions as well and dislikes competition due to the fact that somebody will always lose and feel bad for it.[3]

She is also very affectionate with her bandmates and cares for them a lot, and calls all of them, aside from Kaoru, with nicknames - Kanon as "Kano-chan-senpai", Kokoro as "Kokoron", and Misaki as "Mii-kun".

A list of characters Hagumi interacts with in the game (during Lives and in the dialogues at the end of every game).

Hagumi, depending on the kanji writing, could mean "wing, long time, and beauty" (羽久美). It could also mean "to produce fruit" (育実).