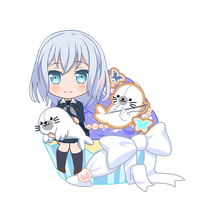 Shindou Amane (進藤あまね)
Kurata Mashiro is a first-year transfer student at Tsukinomori Girls' Academy, and the lead singer of Morfonica. She writes the lyrics for their songs.

She is also classmates with Tsukushi.

Mashiro was first shown in Girls Band Party! Main Story 2 Chapter 8. Poppin'Party finds her at CiRCLE and recognizes her as the girl they talked to after the mini-concert (which is shown in Chapter 3 of Morfonica's First Band Story). Kasumi and the others approach her as she looks at her flyer she made for recruiting band members before taking it down and saying she didn't find being in a band as enjoyable as she imagined it would be. Feeling dejected, she states she'll never come back to CiRCLE, goes away and leaves Poppin'Party in a bewildered state.

Mashiro is a girl of average height with light blue eyes and shoulder-length whitish-blue hair. Her face is very shy-looking.

Mashiro is a kind but quiet, shy, and reserved girl. Though she aspired for Tsukinomori Girls' Academy and managed to get in, she was overwhelmed by the talented individuals around her. As a result, she felt depressed daily until she stumbled upon Poppin'Party's performance in CiRCLE.[3]

She's full of imagination and tends to get lost in her fantasies, especially when she's writing lyrics. Mashiro tends to think negatively quite often, and is afraid of interacting with strangers because she thinks she might give them a bad first impression of herself, as well as make them think she's strange.

She also likes Michelle and all kinds of other fluffy characters.[4] Aside from her listed dislikes, she admits to being a very picky eater[5][6] and is also bad with spicy things.

After she and Rokka befriend each other in Little Rose Harmony, the two tend to argue over who likes Poppin'Party more.

A list of characters Mashiro interacts with in the game (during Lives and in the dialogues at the end of every game).