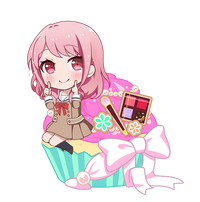 Mai Le (Season 2)
Maruyama Aya is a third-year student at Hanasakigawa Girls' High School and the leader and vocalist of Pastel*Palettes. She also works part-time at the fast-food store with Kanon.

Aya has always admired idols ever since she was young, and the reason she wanted to become an idol was because of the idol group Marmalade's lead, Ayumi.[1] Aya then spent three years being a trainee idol before she was chosen to become the lead singer for Pastel*Palettes.

Aya has fair skin, large pink eyes, and shoulder-length, pastel pink hair with wavy ends. Her bangs are straight cut with a small slant to the corner and a split off-center. Her forelocks are thin and curled. Usually, she wears her hair loose, but when performing or training, she ties it up in pigtails.

Her casual attire is flirty and feminine, with soft colors, floral accents, and jewelry. In her initial outfit, Aya wears a short, frilly white dress with a pink floral pattern, and bangle, a pink jeweled necklace, and carries a pink shoulder bag.

During winter, she wears an off-shoulder knitted white sweater, a gray-purple miniskirt, and pink thigh-high boots with fluffy edges. The outfit is completed by a heart necklace. During summer, she wears a white-and-pink striped dress with lace and flowers on the top, and a headband as a decoration.

On the outside, Aya is very cheerful, high-spirited, and bubbly. She is also very nice and has always been in love with idols. She is unselfish in her pursuits, helping others for the sake of being kind.

Deep down, however, she is a sensitive girl who suffers from a complex stemming from her desire to be noticed. Adding to this, she does not wear her disguise outside because she wants to get noticed and even looks up constantly what people think of her on the internet. She gets worked up easily and tends to cry a lot, thus her improvisation skills are poor and she tends to mess up during her MC duties. She also has a senpai-kouhai relationship with Kasumi and often frets over it, trying her best to look and act like an "admirable, reliable senpai".

Aya works hard in order to become an idol she can be proud of and is very determined about her goal and passion despite her shortcomings. She is also very knowledgeable about certain things, such as taking the perfect selfie, and is shown to constantly practice this. She also likes coming up with different "idol poses" which she's usually proud of, despite the fact that people tease her for them (or misunderstand them, just like in Eve's case[2]).

A list of characters Aya interacts with in the game (during Lives and in the dialogues at the end of every game).