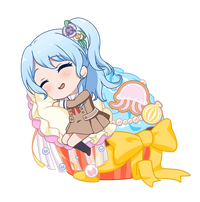 Christie Guidry (Season 2)
Matsubara Kanon is a third-year student at Hanasakigawa Girls' High School and was the first to be roped in by Kokoro to become the drummer for Hello, Happy World! She is very clumsy, quick to burst into tears, and has a bad sense of direction.

Outside of the band, she is good friends with Chisato, whom she has known ever since middle school. She also works part-time at the fast food store together with Aya.

Kanon has big violet eyes and long, curly pale blue hair worn loose with a section held in a side tail. She has short bangs and forelocks with a slight curl on end.

Her casual attire is shown to be frilly and feminine. In her initial wear, Kanon wears an off-the-shoulder light blue dress that reaches up to her knees. The dress has a small ribbon on it, as well as transparent frills on the sleeves and at the top. The ribbon for her side tail has two flowers and a few petals on it.

During winter, Kanon wears a fuzzy cream-colored jacket on top of a bluish-gray dress which has white flower patterns on it, and a dotted black pantyhose. This time her side tail is held by a teal ribbon. During summer, Kanon wears a baby pink T-shirt which has frills on the top and at the sleeves, and a checkered gray skirtall over it. Her side tail is held by a loose pale red ribbon. Her outfit is completed by a red heart necklace.

Sensible and responsible, Kanon is one of the members within Hello, Happy World! that manages to keep the band running smoothly, although she is likely to space out and start thinking about jellyfish. She is fairly shy and easily flustered, and can become a nervous wreck at the drop of a hat and start crying if she feels overwhelmed. Whenever she gets nervous or overwhelmed she tends to say "fuee."

However, she is also shown to have moments where she is determined and takes matters into her own hands. She is also very caring and kind, as well as hardworking.

A list of characters Kanon interacts with in the game (during Lives and in the dialogues at the end of every game).

Retrieved from "https://bandori.fandom.com/wiki/Matsubara_Kanon?oldid=112376"
Community content is available under CC-BY-SA unless otherwise noted.