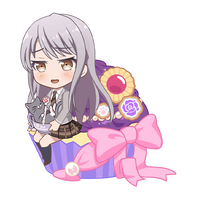 Anything too bitter (especially bitter melon)

Olivia Swasey (Season 2)
Minato Yukina is a third-year student at Haneoka Girls' High School, the leader and vocalist of Roselia. She is a powerful vocalist, sparking the admiration of the other Roselia members, as well as the other people around her.

She is next-door neighbors with her childhood friend Lisa, and also considers Ran somewhat of a rival.

Her father, who was a professional singer, is the reason Yukina started singing. One of her goals was to reach the top as a vocalist that would impress her father and encourage him to start his pro career again; as the story goes on, she wants Roselia as a whole to become the best instead of just herself.

She is also trying to get Roselia to the "Future World Fes", which is a music festival reserved only for the best bands in the world, and where her father played as well.

Yukina has sharp, gold eyes and long silver hair worn loose with some type of hair decoration. Her long forelocks rest over her shoulders and her bangs just reach her eyes.

Her casual attire is fairly fancy with muted or dark tones. In her initial outfit, Yukina wears a white buttoned-up shirt with frills and a knee-length black pencil skirt. Her outfit is complemented by a black butterfly hairpin and black bracelet with a rose on it.

During winter, Yukina wears a small black cardigan with a blue button-up shirt with frills in the middle, and a two-layered white knee-length skirt and a gray ribbon with purple lace and a black rose in the middle. She also wears black tights with both her default and winter outfits. During summer she wears a sleeveless blue-gray shirt with stripes, a white ribbon around her neck, and a two-layered indigo skirt.

Yukina is a cold-blooded, fierce and passionate girl. She has a cutthroat attitude towards reaching her goals, expects nothing less than perfect, and takes practice very seriously. Because of this, she has no qualms with chiding or insulting someone if she feels they are underperforming. She is openly dismissive to people she deems below her standards.

However, with the people who are on her good side, she is not quite as cold as usual. Though Yukina is proud of her abilities and talent as a singer, she has also seen this as a bit of a weakness - because she thinks she is only good at singing[1]. She also has trouble displaying her emotions properly and appears stoic most of the time.

She secretly loves cats[2][3] and tends to deny it when questioned about it. Yukina also tends to be stubborn over certain things such as not being able to do household chores[4].

Outside of her bandmates (and Hina), whom she calls by their first names, she refers to everyone with their last names and honorifics.

A list of characters Yukina interacts with in the game (during Lives and in the dialogues at the end of every game).

Minato (湊) means "to assemble together."

Retrieved from "https://bandori.fandom.com/wiki/Minato_Yukina?oldid=117892"
Community content is available under CC-BY-SA unless otherwise noted.