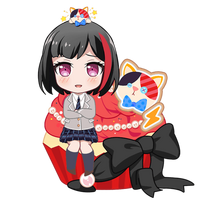 Mitake Ran is a second-year student at Haneoka Girls' High School and the lead singer and rhythm guitarist of Afterglow.

She is the only child of the masters of a flower arrangement school that dates back to over 100 years ago, and which her father currently owns.

She considers Yukina somewhat of a rival.

Ran has short black hair with her short bangs partially tucked beneath her forelocks, one of which is dyed red. She has partially sharp dark red eyes.

Her casual attire is fairly simple and monotone, befitting her rebellious and tomboyish personality. She wears a turtleneck light gray sweater, a black leather jacket, short ripped denim shorts, a black belt around her waist and a pair of black tights.

During winter, she wears a red scarf with three pin-buttons on it, a blue sweater with the word "ROCK" spelled on it and two pin-buttons, a short black skirt with two decorative zippers and a pair of tights. During summer, she wears a transparent sleeveless shirt with a black tank top on top of it, ripped denim shorts, and a necklace.

Prior to forming the band, Ran's hair was completely black and she didn't have her signature red stripe[1].

While Ran has no particular interests, she is strong-willed and hates losing, and is the type of person to treasure her childhood friends and family deeply. Despite this, she founded Afterglow as an attempt to rebel against her father, who wants her to inherit the school.

After she proves to her father that she is serious about the band in Afterglow's First Band Story, the two get on better terms and he stops trying to force Ran inherit the school, and Ran starts participating in flower arranging more actively, as well as showing her passion towards flowers. He also starts attending their concerts frequently and supporting them in different ways, which embarrasses Ran[2][3]. Despite their awkwardness at first, she and Arisa befriend each other in the Arisa's "Not Bad" Day Off event over their shared love of taking care of plants and flowers.

Ran has an aloof nature, which hides her loneliness from other people. Deep down, she wishes to become closer to others, but can be socially awkward and has a tendency to trip over her words. She can be easily flustered and is somewhat hot-blooded.

Ran keeps her problems to herself and brushes off help from others, but while she may appear cold or detached, the warmer side to her is best seen in her quiet fondness towards her friends, primarily the other members of Afterglow. Ran observes the other members while remaining unobtrusive and cares for them greatly; she often asks about their well-being or laughs at their jokes, albeit subtly.

A list of characters Ran interacts with in the game (during Lives and in the dialogues at the end of every game).