Shindou Amane
Suguta Hina
Nishio Yuka
mika
Ayasa
Morfonica, stylized as Morƒonica, and with a shorthand of Monica (モニカ), is an all-girl band in the BanG Dream! franchise. The group consists of five members: Kurata Mashiro on vocals, Kirigaya Touko on guitar, Hiromachi Nanami on bass, Futaba Tsukushi on drums, and Yashio Rui on violin. They debuted with the song Daylight.

Morfonica is a violin rock band made up of first-year students from the prestigious and rich school Tsukinomori Girls' Academy, led by Futaba Tsukushi on the drums.

Fuee! This section is missing content and is marked as stub!
Our community needs more information on this section! Can you help out? Click here to add more. 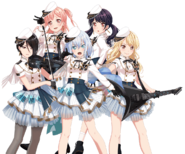