Nijikki Hinako is Glitter*Green's drummer, and an inventory worker at Edogawa Music. She and the other members of Glitter*Green were members of the Hanasakigawa Girls' High School's student council before graduating.

Hinako has lowly drooped soft brown eyes and matching hair nearly reaching her shoulders. Most of her bangs are brushed to the left, with her forelocks framing her face.

Hinako is a friendly and loud girl with an interest in "cute" things - namely girls. She tends to be invasive towards others if she takes a liking to them until pulled away or distracted by something else.

Initially Hinako appeared to be the "silent, untalkative" type since she never spoke during performances, but as it turned out, she was told by Rii to stay quiet to avoid "ruining the band's image."

Adding to her energetic personality, she tends to give people nicknames and also views everything through her unique worldview, which she calls the "Hina-chan World".

Hinako (ひなこ): Her first name has no specific meaning due to being written in hiragana. 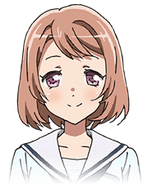 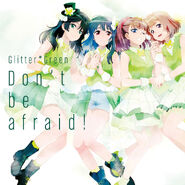 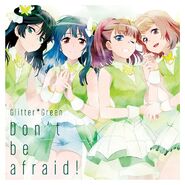