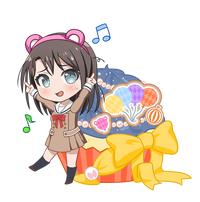 "One with Common Sense in a Bear"

Anything on a family restaurant's menu

Shannon Emerick (Season 2)
Okusawa Misaki is a second-year student at Hanasakigawa Girls' High School and a member of Hello, Happy World! Under the "guise" of the mascot character Michelle, she is the DJ and composer of the band; as Misaki, she is the composer and Michelle's "agent."

Misaki began wearing the bear costume at a local part-time job when she was roped into joining the band by her classmate Kokoro. Outside of the band, she is friends with Rimi.

Misaki has pale grey eyes and shoulder-length black hair that seems thin. She has a short side fringe and her hair is held back to the left with a pink hair clip.

Misaki sports a tomboy-ish casual getup, her casual attire consisting of a grey hoodie with the word "FUNNY" across the front and a cropped blue jacket on top. She wears black shorts underneath, and a grey and black cap with a bear on the side.

During winter she wears a dark blue-violet knitted beanie, a blue sweater with white stripes and the word "FUNNY" in red, a blue knee-length tube skirt and a pair of maroon tights. During summer she dons a white T-shirt with a striped gray tank top over it, and shorts with a brown belt.

Misaki serves as the "normal girl" trope in the group of five in Hello, Happy World! She is a relatively laidback person who is unable to fight against the flow of a conversation or series of events even if she attempts to do so, the most prominent example being the series of events leading up to her joining the band in the first place. Her initial personality displayed that she didn't want any trouble, never wanted it at any point in time, and would have preferred a quieter life if possible.

Misaki is kind, reserved and considerate towards others, though she may also reply sarcastically or exasperatedly and sometimes struggle with the other girls in her band with the exception of Kanon, whom she considers the only other reasonable member. She has been forced into the role of the "straight man" of the group thanks to her relative normality as a person compared to the stooges of the band, scolding or commenting on the antics of the other members in immediate response. Most of her comments go unheeded, unheard, or not understood.

Despite the exasperation she lives with by being the closest thing to a normal person the band has, Misaki is a diligent individual capable of getting things done when she wants to get them done. She books live shows for the band, accommodates Kokoro's whims and tends to look for new opportunities for the band, something the whole band appreciates her for.

Even with a hardworking nature, exemplified by her accomplishments working with Hello, Happy World!, she tends to debase her achievements and claim that anyone else could do what she does. For example, whenever people praise her for being able to understand Kokoro's hums and make them into songs, she'll shrug it off with "it's nothing special."

A list of characters Misaki interacts with in the game (during Lives and in the dialogues at the end of every game).