Pastel*Palettes, stylized as Pastel✽Palettes and with a shorthand of PasuPare (パスパレ), is an all-girl band in the BanG Dream! franchise. The group consists of five members, namely Maruyama Aya on vocals, Hikawa Hina on guitar, Shirasagi Chisato on bass, Yamato Maya on drums, and Wakamiya Eve on keytar. They debuted with the song Shuwarin☆Drea~min.

An idol band formed by a talent agency. The band is made up of Aya (Vo.), who has spent huge amounts of time training for her debut; celebrity and child actor Chisato (Ba.), and modeling sensation Eve (Key.). They were later joined by Hina (Gt.), who passed the band's auditions and then studio musician Maya (Dr.). The five of them are using this experience to bolster their very own definition of an "idol" and what is it to be one. 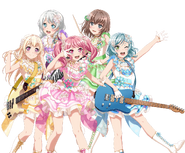 Pastel＊Palettes' costumes are inspired by Magical Girls and Lolita-style dresses with their pastel theme colors (pink, blue, green, purple, and yellow), with white and accenting of another color (blue, purple, yellow, or green). Originally they wore a dress with a corset top that had ribbon lacing or bows at the middle and two ribbons on each side of the chest, with the exception of Aya's dress, which has one large ribbon at the middle. The skirt is shaped to reveal shorter white fabric, and two layers of ruffles. Sewn to the back is a bow in their theme color with frilly white or pale-colored tails. They also wear ribbons on their wrist and frilly cuffs beneath the shoulder, and a frilly choker. Their shoes have small heels and ankle straps wrapped around the foot and ankle, worn with white stockings that have a ribbon on the side of the cuff. Each girl wears two white ribbons on their hair.

During the first anniversary, the band switches to a somewhat more casual outfit composed of a pale pastel top in their theme color with lace details and gold accents worn beneath a white vest with the same gold detail and a ribbon sewn to the back with scalloped tails. On the lapel's right corner is a tiny bow in their secondary color that has a chain attached to the opposite side, and around her neck is a white ribbon striped with a darker shade of her color and held by a rainbow flower. Fabric sticks out of the bottom of the vest to form a cape-like layer covering the skirt, which is a white and gold pleat with ruffled pieces of fabric sewn over and under it in the girls' theme colors. A chain hangs over the skirt, adorned by five flowers in each girls' color. Each girl gains white short boots with pale frilly socks in her color to match her glove detail, along with flower earrings and a single ribbon adorned by the same flower, with the exception of Aya, who gains two.