A girl band always searching for that sparkling, heart-pounding beat, based on Kasumi's (Gt. & Vo.) childhood observation of the stars shining in the night sky. The other four members are music-lover Tae (Gt.), shy but confident girl Rimi (Ba.), kind and family-oriented Saaya (Dr.), and constant contrarian Arisa (Key.). They have band practice in Arisa's basement, and what they lack in skill and experience, they more than make up for in gusto. 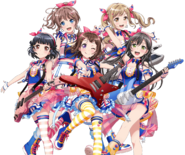 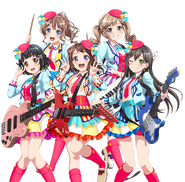 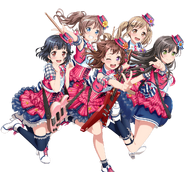 In the anime, each member wore a similar outfit reminiscent of stylized uniforms featuring the girls theme color in both solid and plaid fabrics. This outfit is composed of a white top, two members having sleeves with a plaid cuff, and three without; instead having plaid lace straps worn under shoulder. At the neck is a plaid tie or bow-tie, and black suspender straps adorned with gold lined stars and bows. The straps connect to a brown belt with a star buckle, worn over fabric wrapped around the waist and a small, gold star chain. Kasumi and Saaya wear black shorts with a piece of plaid fabric hanging on the left hip, with Tae matching them but wearing dark blue shorts or miniskirt. Rimi and Arisa wear plaid skirts with a frilly petticoat. Each girl wears matching shoes of their theme color in a darker or lighter shade and accent by gold detailing, along with glittering black stockings or tube socks that have a gold star cut around the top. On their wrists are multiple black accessories, and each girl wears matching hair accessories or star earrings.

In the first anniversary, the girls switch to a more colorful and lively outfit. The top is cut beneath the breast with polka-dot pattern, stars, light blue stripes, colorful hot pink dots, and yellow dripping paint with a white collar that has stripes of azure and a flap of violet, purple, hot pink, orange, or blue fabric depending on the member. The suspender straps from the first outfit are kept but lack the bows, connecting to a colorful dot waistband. Each girl wears a different accessory beneath the shoulder, in the form of colorful dotted straps, yellow ruffled sleeves, or bracelets made from red, yellow, and blue rings. The bottoms are slightly different, coming in the form of a pair of shorts or skirt accent by spheres of blue and pink alternating with larger raspberry spheres. The skirt reminiscent of the top, trim with ruffles of lime and yellow, while the shorts are black with raspberry dripped paint instead of yellow and accent by fabric matching the skirt. Each member wears black shoes with yellow strings and socks, along with colorful spheres on the wrists and many colorful star and sphere hair accessories.