RAISE A SUILEN (also shortened to RAS every now and then) is an all-girl band in the BanG Dream! franchise. The group consists of five members, namely Wakana Rei (LAYER) on vocals and bass, Asahi Rokka (LOCK) on guitar, Satou Masuki (MASKING) on drums, Nyubara Reona (PAREO) on keyboard, and Tamade Chiyu (CHU²) as DJ.

They were tentatively given the name THE THIRD (仮) (lit. THE THIRD (Beta) before getting their official name which was announced during their second live.

They were officially added into the game Girls Band Party! on June 10, 2020.

Initially, the group was formed solely as a backup band due to the voice actresses of Afterglow, Pastel*Palettes, and Hello, Happy World! being unable to play their characters' instruments, with the band giving the vocalists a chance to perform. However, they also have their own original songs. It was later revealed after their second live that they officially have become part of the BanG Dream! franchise. Furthermore, it was also announced that they had been given an official band name, RAISE A SUILEN in addition to the newly recruited member, Tsumugi Risa.

Fuee! This section is missing content and is marked as stub!
Our community needs more information on this section! Can you help out? Click here to add more. 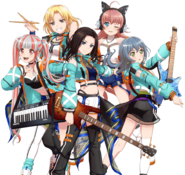