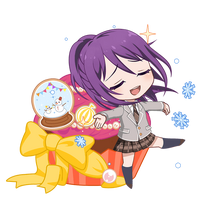 Kao-chan (Chisato, in the past)

Drama (Has been acting in theater productions since middle school[1])

She is very popular with ladies, whom she dubs her "little kittens" (子猫ーちゃん, koneko-chan). Himari and Rimi in particular have a tendency of blushing in her presence.

Outside of the band, she is also Chisato's childhood friend, and their parents are good friends as well.

Kaoru is a tall girl with angular facial features, slanted crimson eyes, and long purple hair worn in a ponytail. She has chest-length forelocks and bangs that frame her face with a single lock that hangs loosely between her eyes.

Her casual attire is normally boyish and formal. In her initial casual wear, Kaoru wears a high-collared white shirt with a black vest on top of it, black vertically striped loose pants, and a pearl necklace as a finishing touch.

During winter Kaoru wears a gray sweater with white stripes at the top and bottom, a black loose scarf around her neck, and white jeans. During summer she wears a white front tie shirt which has black flowers on the left side, a blue shirt underneath, and high-waisted jeans with a brown belt. Her outfit is completed by a thin chain necklace.

When she was younger, her hair reached only up to her shoulders; after middle school, she started growing it out.

A flamboyant actress, Kaoru has an extravagant personality. She is rather pretentious and bombastic, having a tendency to use impressive-sounding words to the point of sounding foreign and hard to understand. She views herself as a prince and sees other girls as princesses, while quoting Shakespeare or other philosophers (sometimes incorrectly). She appears highly flirtatious and is very popular among other girls, not only for her passionate mannerisms, but because she is also surprisingly reliable. If she is aware someone may be in a bad mood or feels sad, she will try to encourage them or help them feel better.

When by herself, her "quirks" seem to lessen, if not vanish entirely at times. She appears to be aware of how she can come off to others; sometimes she struggles to have time to herself due to having so many fans and is aware that she likes certain things that don't fit her "character". She is even able to increase her actress's personality if she feels it is necessary.

Though she appears very intelligent, she can often be just as airheaded as Kokoro and Hagumi - such as mistakenly assuming the philosopher Friedrich Nietzsche was a woman, or repeatedly attempting to push on a door that could only be opened by pulling.[2] Her catchphrase is "fleeting", although when other people question her about what it means, she does not answer clearly.

Despite appearing to be very prideful, Kaoru struggled with self-esteem problems in the past and created her princely persona to flatter other girls so they may never feel the same way. She also used to be shyer and lamented the fact that she was not strong enough to protect Chisato from their classmates, believing she was an evil and mean person because of one of the roles she acted in.[3]

A list of characters Kaoru interacts with in the game (during Lives and in the dialogues at the end of every game).