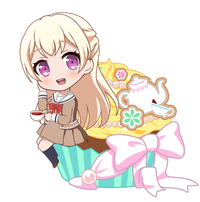 Patricia Duran (Season 2)
Shirasagi Chisato is a third-year student at Hanasakigawa Girls' High School and the bassist of Pastel*Palettes. She is polite and very responsible. Prior to joining Pastel*Palettes, she was a child actress and did not know how to play the bass.

Outside of the band, she is also Kanon's and Kaoru's childhood friend; the former she met in middle school, and the latter she met much earlier through their parents.

She initially thought that Pastel*Palettes was not going to last for very long and was ready to leave them after their failure; however, thanks to Aya's hard work and stubbornness, she decided to stay in the band.

Chisato is a girl of slightly below average height. She has long, platinum blonde hair nearly surpassing her chest with her thick, layered bangs split into three portions framing her face. Thin sections of hair is worn beneath her ears and on her shoulders, while her forelocks are pulled back. When performing her loose hair is normally pulled back and held by a white ribbon or other accessories. She has big, droopy violet eyes.

Her casual attire is shown to be very feminine with flowers, sheer fabric, and ribbons.

Chisato is normally very mature, polite and friendly, and gets along with others fairly well. However, she also has a surprisingly blunt side to her personality, and can come across as cold or condescending. This personality is not always provoked, though she tends to be more blunt when she is annoyed or around Kaoru, as she does not appreciate her dramatic personality. She also tends to show this around when people insult or say Pastel*Palettes wouldn't be as good if Chisato wasn't a part of it.

As she has been in the entertainment industry for a long time, Chisato is quite a realist when it comes to it and disliked Aya's idealistic view of it at first. She is also slightly embarrassed of people bringing up her past and previous works as a child actress, as shown in one of the 1-panel comics where Eve told her she'd watched one of the dramas child Chisato had starred in.[1] Chisato is very confident in her skills, but she also dislikes it when people assume that she can do anything.

A list of characters Chisato interacts with in the game (during Lives and in the dialogues at the end of every game).