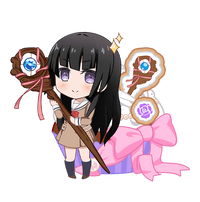 Cynthia Martinez (Season 2)
Shirokane Rinko is a third-year student and the student council president of Hanasakigawa Girls' High School, as well as the last member to join Roselia as their keyboardist. She is a very talented keyboardist who has played the piano ever since she was 5-years-old, and prior to joining Roselia, had even won a music contest.[1]

She is very shy, and is at first scared of the idea of performing in a live concert. She is also the band's costume designer and sews their outfits all by herself.

Her hobbies are reading and playing online games, the latter through which she met her best friend, Ako, who also calls her "Rin-rin".

Rinko has pale skin, and big, slanted violet eyes. She has long black hair styled loosely after a hime cut; heavy bangs across her forehead with straightened sidelocks that reach past her shoulders. Her casual attire is seen as modest with neutral colors and frilly accents. Rinko wears a white buttoned blouse with ruffles sleeves and a frilly collar tied with a black ribbon. She also wears a black knees length skirt, worn tightened around her waist with gold buttons down the middle and accents.

Socially awkward, Rinko is a shy and asocial girl who was initially too frightened to speak in front of others, let alone perform before them. She has a tendency to stammer when speaking, and usually keeps quiet until she feels comfortable.

When she is set on or passionate about something, she does so with conviction, like piano or online games. Rinko also tends to get very excited about her passions, to the point where when she was explaining how Neo Fantasy Online worked to the other Roselia members, she was speaking in an alarming speed.

A list of characters Rinko interacts with in the game (during Lives and in the dialogues at the end of every game).