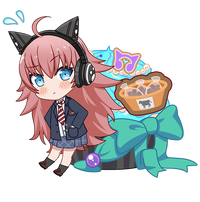 "Ankle-biting Child of the Revolution"

Salad (she can eat a little bit with some dressings)

Hilary Haag (Season 2)
Tamade Chiyu is a returnee who attends Celosia Girls' Academy, which is an international school. She is 14 years old, but due to her excellent grades, she is a second-year high school student.

She goes by the stage name CHU² (チュチュ), read as CHUCHU) and is the leader, producer and DJ for the band RAISE A SUILEN. She uses DTM (Desktop Music) to compose music.

Similarly to Kokoro, she is very rich and lives in a penthouse, where the band also practices at.

Ever since she was young, Chiyu has been involved with music and played different kinds of instruments such as the piano and violin. However, she did not start playing out of her own will, but rather because of her parents' high expectations - particularly her mother Miu, who is a famous violinist working overseas. Despite Chiyu's inadequate skills and the pressure her mother put on her, Miu was always complimenting Chiyu and doing what she thought was the best for her only daughter.

As a result, this led to Chiyu wanting to put together the ultimate band all by herself, as she believes that by doing everything herself, it would force people to recognize her talent.

Chiyu is a short girl. She has sky-blue eyes with voluminous, salmon-colored hair reaching her hips, and a tall single ahoge.

She is normally seen wearing her school uniform, which consists of a white buttoned shirt with a red and white striped tie, a dark blue school blazer, a plaid miniskirt, black crew socks, and brown loafers. She also wears black cat-eared headphones.

Chiyu is very professional, confident, and stubborn about her band and ideas, and likes calling herself a "kind, generous producer". She tends to be quite arrogant and aggressive towards the other bands, as well as her own band members at times; however, she refrains from being rude.[2] While she sometimes has outbursts and yells at her band members, she has admitted to having trouble with controlling her emotions and finding the right words, and tends to get depressed after realizing what she'd done.[3][4]

Chiyu dreams of changing the world with the strongest music, and sees Yukina as her rival, due to Yukina turning down her offer of producing Roselia's music. However, Yukina doesn't share this sentiment of rivalry. As a result, she wants to crush Roselia and prove that her band is better than them; she later adds Poppin'Party to this list as well. After BanG Dream! 3rd Season, she makes peace with both bands and they have mutual respect for each other.

As a result of her studying in an international school, she often speaks English or adds English words to her sentences, and even refers to herself with the katakana spelling of watashi (ワタシ). She also refers to everyone by their full names, including Marina.

A list of characters Chiyu interacts with in the game (during Lives and in the dialogues at the end of every game).

Chiyu (ちゆ), from the characters 知由: Chi (知) means "to know, to understand, to comprehend" while Yu (由) means "cause, reason".