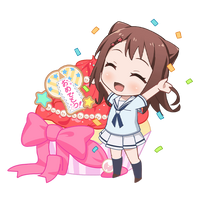 Juliet Simmons (Season 2)
Toyama Kasumi is the main protagonist of the BanG Dream! franchise. She is a second-year student at Hanasakigawa Girls' High School and the leader, vocalist, rhythm guitarist, and songwriter for Poppin'Party.

Outside of the band, she is friends with Aya and Yukina, and, alongside Arisa, is also classmates with Misaki.

Kasumi lives with her parents and has a younger sister, Asuka - whom she calls "Aa-chan" - however, it's not always clear who is the more responsible out of the two.

When she was looking at the stars one night as a child, she heard a sparkling "Star Beat", and ever since that, she's been searching for it. She believes that she found it after she saw her guitar for the first time, and when she formed Poppin'Party.

Kasumi has purple eyes and brown hair worn loose with segments pulled up into star-shaped buns. Her short bangs are framed by longer forelocks held by red star-shaped clips.

In her initial casual wear, she wears a long, baby blue button-up t-shirt dress accompanied by a yellow flannel tied along her waist. She also pairs it with a silver star necklace and a black watch.

During winter, she wears a red collared shirt, a yellow sweater which has white stars on it, a black miniskirt and a pair of tights. During summer, she wears a polka dot white T-shirt with transparent sleeves and a blue skirtall. The outfit is completed with a necklace that has three stars on it.

Cheerful and high-spirited, Kasumi is a playful, active, and generally positive girl that always finds something to be excited or passionate about. She easily makes friends and gets along with everyone, regardless of their personality.

She, alongside with Tomoe, are capable of sharing a mental wavelength with Kokoro. She is also the type to believe in (or fall for) the strangest explanations. However, Kasumi is also quite forgetful, tending to do important things by last moment (though unintentionally so.)

She loves to tease Arisa, but given her kind personality, it's hard to tell if she is deliberately trying to provoke her or if she's oblivious. At times she can also behave melodramatically.

A list of characters Kasumi interacts with in the game (during Lives and in the dialogues at the end of every game).