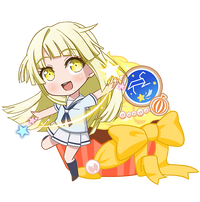 Looking for fun things to do

Her goal in life is to make the entire world smile. Her family is super rich and lives in one of the biggest houses around the area.

Kokoro has large, rounded yellow eyes and long, straight, waist-length platinum blonde hair. Her fringe is cut unevenly and separated into two parts. She has thin forelocks that touch her shoulders.

Her casual attire consists of a red and white striped t-shirt with fluttery sleeves, blue denim short overalls, and a hair tie with red ribbons on her wrist. During winter she wears a red sweater with a pixelated snowman and snowflakes on it and knitted shorts and a beanie with fluffy balls dangling from it. During summer she wears a white and blue T-shirt, a red ribbon-belt, denim shorts, and a necklace.

An idealistic and charismatic young girl coming from a ridiculously rich family, Kokoro dreams of making the entire world smile from music. She effortlessly attracts others to her due to her bright and bubbly nature and often manages to get them swept up into her easygoing pace. Because of her charismatic and naturally imposing personality, she is often able to do and get what she wants. She is also extremely curious and easily amazed, charmed by new things she discovers in the world around her.

Although Kokoro has the optimism and charm of a natural leader, she is also quite scatterbrained and ditzy, and would not be able to get much done without the others in the group helping her. She also has said that she doesn't know what it feels like to be sad, didn't know what stress was until Marina told her[1] and always does her best to combat any kind of negative feelings. Adding to her status a rich girl, she is ignorant about certain normal things.

A list of characters Kokoro interacts with in the game (during Lives and in the dialogues at the end of every game).