Koyama Mami
Tsuzuki Shifune is a character in the BanG Dream! franchise and formerly the owner of the Live House SPACE, where Glitter*Green often performed. She is quite strict and has a no-nonsense personality; however, she is also kind at heart. She holds very high standards when it comes to music. The cast always refers to her as "Owner" instead of her real name.

Tsuzuki was a member of a nationally renowned band called MiraculouScarlet, where she went by the name "Shisen". To dispel the notion that "livehouses are scary", she launched the livehouse SPACE where anyone was able to perform. However, after a band did not finish their performance, she began to hold auditions to determine if a band is suitable to stand on the SPACE stage. She denied Poppin'Party's first attempt, telling them that they lacked something. On their second attempt, she pointed out that they had made several mistakes, but ultimately allowed them to perform at SPACE.

In the 9th episode of BanG Dream! 1st Season, she announced that SPACE was closing down.

In the third season, she became the adviser for the BanG Dream! Girls Band Challenge! and appears in the final episode as well.

She appears once again in Poppin'Party's Band Story 3, being one of the staff members for the Rocking Star Festival's committee. She is against the idea of the concert being live-streamed. 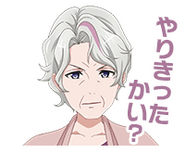 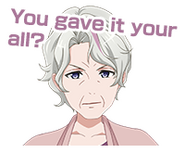