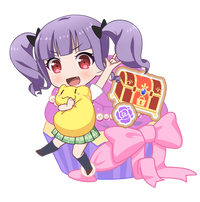 "Blackish Fallen Angel Something Something"

Julia Traber (Season 2)
Udagawa Ako is a first-year student at Haneoka Girls' High School and the drummer for Roselia.

She admires Yukina and her older sister Tomoe, and is best friends with Rinko, whom she calls "Rin-rin". She is also classmates with both Asuka and Rokka.

Ako is a short, petite girl with big, sharp crimson eyes. She has long light purple hair worn in curled pigtails with matching forelocks and straightened bangs. She is also shown with a fanged tooth frequently in the anime and card art.

Her casual attire borders on the mix between punk and gothic design with a cute flair.

Ako is shown to have chuunibyou tendencies and illusions of grandeur and magical powers. Rinko suspects this is the result of her playing online games frequently. She enjoys playing the role while keeping a realistic mentality. However, she tends to sometimes stumble on her words when she's not sure what to say while doing this.

Ako is a cheerful and noisy girl. Although she's only two years younger than the other Roselia members, Ako is treated like the kid sister by the other characters due to her childlike appearance and personality. She is also a very hardworking and passionate drummer, though she may be bad at schoolwork.

Ako often wonders how she can be a "cooler" person, and sometimes feels inadequate compared to her other bandmates; however, as the story goes on, she becomes more confident and both Yukina and Sayo, who initially scoffed or ignored her ideas sometimes, also come to understand her more and get used to her chuunibyou side.

A list of characters Ako interacts with in the game (during Lives and in the dialogues at the end of every game).

Ako (あこ), depending on the kanji writing, possible meanings may include "my child" or "harmonious heart".