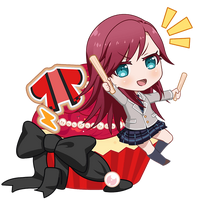 Udagawa Tomoe is a second-year student at Haneoka Girls' High School and Afterglow's drummer. She is Ako's older sister.

Tomoe is friends with the adults who work in the shopping district, and often attends the town's festivals to play the taiko drums. Outside of the band, she is friends with Saaya and also works part-time at the fast food restaurant together with Himari.

Despite only being a second-year student and the same age as the other Afterglow members, Tomoe has the appearance of a young adult. She has slanted turquoise eyes and long, sleek maroon hair.

She is shown in mature, but "cool" style outfits, usually adorned with studs or chains.

During middle school and prior to Afterglow's formation, Tomoe's hair was much shorter and it reached only around her ears; and when she was even younger, she wore her hair in a long ponytail.[1]

Tomoe is a fairly relaxed person, who never says anything bad about other people or holds grudges against them. She keeps the band from falling apart and is idolized for her cool, but mature way of handling things. Despite her mature, punk look, she is very caring towards others and is always there to lend support or a shoulder to cry on. While she is unable to understand Ako's behavior at times, she loves her sister and supports her no matter what.

She is also shown to be hotblooded and the type to rush into things head-first if she thinks someone she cares for has been hurt. This has a tendency to backfire on her at times. Adding to this, Tomoe is also capable of sharing the same mental wavelength as Kasumi and Kokoro, something that has shocked other characters.

A list of characters Tomoe interacts with in the game (during Lives and in the dialogues at the end of every game).

Tomoe (巴) is a circular design of swirling water. It is originally a compound of 鞆 (tomo, "archer's left-wrist protector") +‎ 絵 (e, "picture, drawing"). While the use of the 巴 kanji is possibly for its resemblance to a big snake.