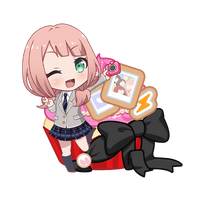 Chaney Moore (Season 2)
Uehara Himari is a second-year student at Haneoka Girls' High School and the leader and bassist of Afterglow. She is a huge fan of Kaoru's.

Himari has medium-length, pale pink hair worn in low pigtails with a tuft of straightened bangs while the remainder is layered. She has fair skin and green eyes with sharp corners.

Her casual attire is fairly feminine with a monotone color scheme.

Himari is cheerful and good-natured and is the band's coordinator. She struggles to read the mood of a situation, which means she sometimes does things that have no effect. She's weak to tearjerkers and sentimental episodes and is fairly romantic. She is also weak to being teased and tends to be clumsy and fall around at times.

She enjoys comparing the different sweets she buys from convenience stores and likes making them as well. She also likes cute things like clothing and stuffed animals but wants to be seen as "cool" by others. Her ideas are normally teased or rejected - but her bandmates always try to show support in their own way.

A list of characters Himari interacts with in the game (during Lives and in the dialogues at the end of every game).