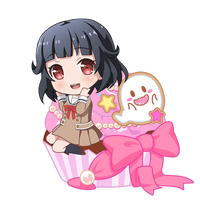 Avery Smithhart (Season 2)
Ushigome Rimi is a second-year student at Hanasakigawa Girls' High School and the bassist and composer for Poppin'Party. The other band members call her both Rimi and Rimi-rin.

Outside of the band, she is friends with Misaki, and similarly to Himari, one of Kaoru's fangirls. She is also a huge fan of the Yamabuki Bakery, and especially loves their chocolate cornets.

Rimi's pink bass guitar is a hand-me-down from her older sister Yuri, who is two years older than her and also the lead vocalist of the band Glitter*Green.

During Rimi's high school entrance ceremony, she heard Kasumi's self-introduction that was filled with boundless optimism, and this sparked her interest in her. Though Rimi wanted to change her cowardly and shy personality, she had initially been unable to do anything about it.

At first, Rimi declined Kasumi's invitation to become a member of the band Poppin'Party because of her stage fright, but everything changed when she became inspired by Kasumi who sang onstage at SPACE until Glitter*Green, who were late because of the storm, arrived. She eventually found her confidence to overcome her stage fright and managed to perform with Kasumi and Arisa. After the show, she finally decided to join Kasumi's band as its third member and bassist.

Rimi resembles her older sister, having the same black hair and red eyes. But while Yuri's eyes are sharper in shape, hers are downward slanted. Her short black hair is chin-length with sections of hair pulled back in a loop on the side of her head, while her bangs are straight-cut.

Rimi is a shy and reserved girl who admires her older sister and often gushes over her. She tends to compare herself to the others frequently, and wishes she could be more confident and be able to "speak up" more often. Rimi is cute and sweet-natured, and often blushes when flustered, but at times can be very determined and strong as well.

As Rimi used to live in the Kansai region, her Kansai dialect sometimes slips into her speech when she stumbles on her sentences or is very nervous; she is a bit embarrassed of this.

A list of characters Rimi interacts with in the game (during Lives and in the dialogues at the end of every game).

Ushigome (牛込) is a name of a neighborhood and a former ward in the now-defunct Tokyo City. It was merged with the Yotsuya ward of Tokyo City and Yodabashi suburban ward of Tokyo Prefecture to form the modern Shinjuku ward.

Rimi (りみ) has no meaning on its own.