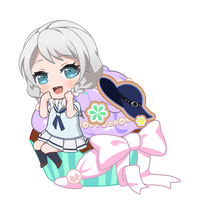 Skyler Sinclair (Season 2)
Wakamiya Eve is a second-year student at Hanasakigawa Girls' High School and the keytarist for Pastel*Palettes. She is in the same class as Kasumi and many other members of Poppin'Party. Before joining Pastel*Palettes, she was a model at the same agency, and had some skill in playing the piano.

Eve is half-Japanese, half-Finnish, with her father being Japanese, and her mother Finnish. She comes from Finland and finds Japanese culture exciting, often citing bushido, the code of Japanese warriors.

Outside of the band, she is friends with Tsugumi and also works part-time at her family's cafe as a waitress.

Eve has fair skin and big, feminine turquoise eyes. Her medium length silver hair is worn in thick braided pigtails normally adorned with ribbons, a headband, or a hat. Her bangs are split off-center with a loose, pointed strand layered over them on either side of the head.

Eve's casual attire is mature and gender-ambiguous; in her initial wear, she wears a turquoise patterned turtleneck on top of a white long-sleeved blouse. Eve also wears white jeans held by a black belt.

During winter, Eve wears a white-violet sweater, a brown and white puff ball scarf, a knee-length denim skirt with a white belt around it and black tights. During summer, she wears a sleeveless baby blue turtleneck and high-waisted white loose pants.

A bright and earnest girl who tackles everything standing in her path full throttle. She is enthusiastic and chipper, eager to learn all that she can about Japan. At times her thought process can be strange, and when going on about Bushido and other samurai-related things, which she takes quite seriously, she comes off as humorous. Her actions also tend to confuse Aya and the people around her.

As the youngest member of Pastel*Palettes, Eve is easygoing, polite and loves hugging people, as well as treasures all of her friends dearly. Though she has some misconceptions about Japan and sometimes misunderstands what other people say, or mispronounces certain words and uses idioms wrong, Eve always tries her best to learn.

According to her best friend Hanne, not only does Eve dislike lying (and feels bad if she does so), but she is also very bad at it due to how her voice cracks whenever she feels guilty or she's trying to hide something[2].

A list of characters Eve interacts with in the game (during Lives and in the dialogues at the end of every game).

Eve or Ivu (イヴ) refers to the biblical character "Eve", otherwise known as "the first woman". In Finnish, "Eve" is most commonly used as a nickname or abbreviation for "Eveliina", while "Eve" itself is quite rare.