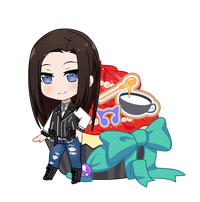 Shelley Calene-Black (Season 2)
Wakana Rei is a second-year high school student at Geijutsu Academy's Musical Department. She goes by the stage name LAYER (レイヤ) and is the vocalist and bassist for the band RAISE A SUILEN.

She is Tae's childhood friend.

Rei has fair skin and smooth dark-brown hair reaching her top back with no fringe, but bangs that cover her ears and lightning blue eyes.

Her outfit consists of a white shirt with a wide neckline and long sleeves to her wrists, slightly torn jeans, and a black sleeveless jacket open until mid-torso.

Rei is a calm and mature girl. Due to her mature attitude, she has a tendency to keep a certain feeling of distance from others (for example, hiding her troubles from others, as shown in the event outside/inside where she overworked herself in order to perfectly play the hard bass parts she was given during her and Masuki's gig). She is also sometimes mistaken for an adult due to her mature appearance; in an area conversation, she says the movie theater workers couldn't believe she's a high school student.

She is a professional singer who can sing any song[1], and has loved singing ever since she was young. She has a very deep voice for a teenager. As a child, she even mentions that she was too shy to sing because she "doesn't sound like a kid", before Tae started interacting with her and she was able to overcome her complex.

A list of characters Rei interacts with in the game (during Lives and in the dialogues at the end of every game).

Rei (レイ): Her first name has no specific meaning due to being written in katakana.