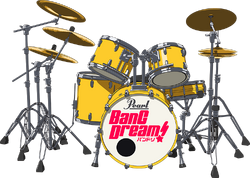 Yamabuki Saaya is a second-year student at Hanasakigawa Girls' High School and the drummer of Poppin'Party. She became good friends with her classmate Kasumi during their high school entrance ceremony, and since then they eat lunch together every day.

She is also good friends with Tomoe because they're both older sisters and drummers, and with Moca due to her being the self-proclaimed number #1 fan of Yamabuki Bakery. She and Rimi are also classmates with Kokoro.

Saaya is the oldest of three children in her family; she has a younger brother named Jun, and a younger sister named Sana. Saaya's family owns the Yamabuki Bakery, at which she helps out, even during the school term.

Saaya used to play in a girls' band called CHiSPA when she was in middle school, but quit because she didn't want to burden her bandmates and her family due to an incident that happened before an important performance. But thanks to Kasumi, who never gave up on her, and her mother's support, she regained her passion for music and her desire to perform in a band, thus became the last member of Poppin'Party to join.

Saaya has slanted royal blue eyes and long, curly brown hair worn in a high ponytail, usually tied up in a ribbon. She has spread-out bangs and shoulder-length curled forelocks.

A kind, empathetic and hardworking person who cares deeply about her friends and family, Saaya often lends an ear to the people around her. She is generally level-headed and easygoing, and is like an "older sister" to the other girls, always willing to help them out in hard times. In addition to this, Saaya is the most mature member of Poppin'Party, and good at dealing with kids. Because of her kind nature, she has a hard time saying "no" to her friends or their requests, such as helping Hagumi to study.

A list of characters Saaya interacts with in the game (during Lives and in the dialogues at the end of every game).

Yamabuki (山吹) refers to the Japanese rose Kerria japonica, also known as Japanese marigold bush. It can also be split into two parts: Yama (山) which means "mountain" and Buki which means "song" or "wind".