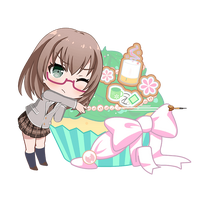 Drama (Mainly works as a technician)

Chelsea McCurdy (Season 2)
Yamato Maya is a third-year student at Haneoka Girls' High School and the drummer of Pastel*Palettes.

Prior to joining the band, she was a studio musician. Originally, Maya wasn't intended to be a member of the band, but was prompted in by Chisato due to their lack of finding a drummer, and after they had seen Maya without her glasses.

Maya has shoulder-length, pale brown hair with layered forelocks and a tuft of bangs covering her forehead. She wears red half-rim glasses over her dark green eyes. In her initial outfit, Maya wears a white tank-top paired with black pants that have thin suspender straps, brown fingerless gloves, and a long, dull blue jacket tied around her waist. Her outfit is completed with a beige newspaper boy cap.

During winter, she wears a black turtleneck sweater, an army green short skirt and forest green leggings. During summer, she wears short-sleeved white hoodie with a walking, drawn black cat and the text "Cat Walk" on it, and with a reddish-brown flannel tied around her waist. She also wears black trousers.

During performances, she removes her glasses and uses contact lenses.

A tomboy who appears awkward around other people, Maya isn't very social and does not take care of her hair and skin, and used to be a bit socially withdrawn prior to becoming a drummer. But around musical equipment, she becomes ecstatic and is impossible to stop when talking about her beloved hobby unless she herself realizes she is rambling on. She has a casual way of speaking and tends to sometimes use the short version of "desu", "-ssu" while ending her sentences. Despite this she refers to everyone, including those who are younger than her, with the "-san" honorific.

Maya admires Eve for her looks and is also good friends with her, and Aya as well for her dedication to becoming a great idol. Because of her awkward nature, she is also often teased by Hina (unintentionally most of the time) and gently scolded by Chisato because of her unique "Huhehe" laugh. Despite this, the other band members, as well as other characters, acknowledge her as a very reliable girl and enjoy listening to her knowledge of music and different kinds of musical equipment. She is also quite smart, and having known Kaoru for many years, Maya is also able to "translate" the things that Kaoru says[1].

Maya was shown to be insecure at first whether she deserved to be, and was fitting enough to be an idol. As the story goes on, along with her interacting with the other members (especially Aya) Maya realizes she enjoys being an idol and wants to stay in Pastel*Palettes no matter what. She also initially did not believe that she would gain a lot of fans as she thought of herself as more plain compared to the other band members.

A list of characters Maya interacts with in the game (during Lives and in the dialogues at the end of every game).

Maya's full name itself is a palindrome, a fact she likes mentioning during her introductions.