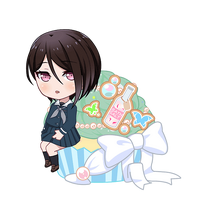 Ayasa
Yashio Rui is a first-year student at Tsukinomori Girls' Academy and the violinist and composer of Morfonica.

Rui is a talented violinist who has played the violin ever since she was young. However, at some point in her life, she lost in a competition, coming to the conclusion that she had no true talent and that playing the violin was completely meaningless. As a result, Rui quit participating in competitions and stopped playing the violin. It is implied that the person she lost to was Rinko at a younger age.

Rui is also a member of Tsukinomori Girls' Academy's student council. She initially watched Morfonica's band practices only because they needed someone from the student council to monitor their activities, before the other girls managed to convince her to join the band.

Rui has dark brown hair that goes just past chin-length and thin, brownish-red eyes. Her bangs are parted to her left and go down past her chin. Part of her bangs goes between her eyes, down to the base of her nose.

Rui is a talented individual who is always at the top of her class. She has a dry personality and is always aiming for top results, and speaks in a polite manner. She is very logical and realistic, but can also be blunt when it comes to her opinions, especially about talents or music. In addition to her logical nature, she plans out her days and schedules very thoroughly, and as such, doesn't understand things like people hanging out or taking detours after school. Due to her stoic and composed look, Rui says that people tend to think she's angry even when she's not.

A list of characters Rui interacts with in the game (during Lives and in the dialogues at the end of every game).

Rui (瑠唯): Ru (瑠) means "lapis", while the second part of her name (唯) has no meaning and is only an emphasis.